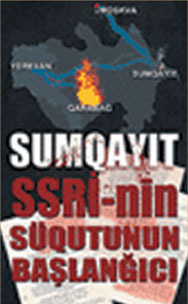 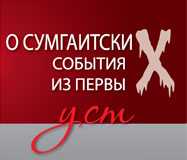 Extracts from the interviews of Sumgayit residents and employees in Law Enforcement, Party and Soviet agencies in the course of mass riots

The testimonies of Azerbaijani Law Enforcement employees, members of the investigation group of the USSR General Prosector such as Shirin Mammadov, Nadir Mammadov, Ilham Yusifov, Eldaniz Huseynov, Malik Safarov, Miraziz Nasirov, Ilham Mammadov,Maharrem Maharremov, Ilham Guliyev and others indicate that Sumgayit incidents were carried out by Armenians and the special service agencies of the foreign countries.

Valikhanov Niyazi Asif hinted that Armenian Grigorian Eduard Robertovich actively participated in the riots. The investigation clarified that certain group of people were highly interested in the Sumgayit incidents. In January 1989, a deputy of Prosecutor General's Office of the USSR came to Sumgayit and demanded the completion of the legal proceedings against detainees in a short span of time. Then they mainly focused on the completion of the legal proceedings against the detainees.

Ibrahimov Akif Gudret stated in his interview that nearly 135 Armenians’ homes were sacked in Sumgayit. However, the number of killed Armenians was much less than armenians claim. It is possible to argue that some of Armenians left their homes as they were aware of, or were informed about the Sumgayit incidents in advance.

Mansur Ibayev, a member of Supreme Court of Azerbaijan SSR, who judged the criminal cases filed against E. Grigrorian and others said, though there was enough proofs in the case that the crimes were committed by Armenians, the investigation agency did not take any measure to charge the criminals.

Hajialiyev Hajiali Yarali, a former employee of the Sumgayit city branch of the KGB testified that he had received information about Grigorian Eduard Robertovich, nicknamed «Pasha» was one of the main organizers and executors of the Sumgayit incidents. In this fashion, he informed Popov Yevgeniy Alekseyevich, who headed the operations of the KGB of the USSR for the Sumgayit incidents. However, he acted with suspicion towards the issue, saying that he did not believe in the organization of the murder against Armenians by a person of the same nationality.

Guliyeva Khalida Shirin, the chief pediatrist of the Sumgayit city, noted in her interview that the special headquarter of the medical staff had been established immediatley after the clash. Furthermore, ambulances transported the wounded to the hospitals and provided them with necessary aid. Amaliya, a nurse who was of Armenian nationality approached her and said that all the killed Armenians were from Karabakh.

K.Guliyeva added, one of the employees of the Party Committee of the Nagorno-Karabakh Autonomous Region, made a phone call to Svetlana, who lived in Sumgayit and was a chief nurse at the child policlinic No 2. That person warned Svetlana and demanded her to leave the city where the confrontations would soon happen.

The Armenians confessed that the Sumgayit incidents had inlfuenced on the state of the Nagorno-Karabakh conflict. If there were not any incidents in Sumgayit, the protests in Stepanakert (Khankendi) would slacken and Dashnaks’ plans would be upside down.

In that period of time, the testimonies of Malak Bayramova, the second secretary of the Party Committe of the Sumgayit city, Mammadov Tavakkul Yagub, a chairman of of the Executive Committee of Soviet of People’s Deputies of Sumgayit and others prove that general Krayev’s and others’ instructions and orders which were sent from Moscow paralyzed the operations of the city council and local power structures.

Rahimov Seyfeddin Karim, a former instructor of the Party Committee of the Sumgayit city revealed in his interview, they had held conversations to calm the protesters down during those days. On the other hand, the square was full of men and women who did not look like the local people, carried out anti-Armenia propaganda and introduced themselves as fugitives from Armenia and as people who brought a bus with full of dead people. Furthermore, there was a group of such people in a yellow «PAZ» brand bus in the square. When the bus stopped in the middle of the street full of the protestors, the cries were heard from the bus. It seemed as if the legs of dead people were seen from the bus when the doors were opened. The young men and women in black told, Armenians had committed murder against Azerbaijanis and cut the breasts of women. In this regard, they called for taking revenge from Armenians. When one of the protestors shouted saying that they were lying. One of the people who got off the bus turned at the protestor by saying “ -You are an Armenian!” That person provoked the people by saying -they could get no news from them, and that he knows where Armenians lived in-, and a group of people tagged after that person.

Tagiyev Mayil Bagi, the chief psychiatrist of the Sumgayit city said in his interview that he met a woman by name Anaida Martirosyan, a reporter of the Russian newspaper «Kommunist Sumqaita» when he was on leave in Sochi in early February in 1988. He told her that he would return back Sumgayit on 10 February. Then he suggested to go back together. In her turn, Anaida said that she did not want to return back to Sumgayit and she might be back by mid-March. Then she added that her leave was not too long. However, she knew that soon there would be major unpleasant incidents in Sumgayit. In this manner, she did not want to go back to Sumgayit.

Aliyeva Faige Zeynal who worked as a nurse in the Sumgayit city highlighted in her interview that the landlords of Armenian nationality told the medical staff that they were shot by Armenians who came from Armenia in the course of events. Furthermore, the people of Armenian nationality who worked with them such as Israelyan Sveta, her sister Rima and Vlasyan Irina said, «wait for the end, we will murder, explode you».

Huseynov Tofig Ismayil, a doctor of Sports Health Center of the Sumgayit city emphasized that Armenian Avakyan Voldyan, a chief doctor of the health center expressed his views by saying «we cannot realize our plans as long as Haydar Aliyev is in Moscow». Additionally, he noted that everyday Avakyan and some unkown people had gathered in Avakyan’s room to discuss something in secret.

Guliyev Jafar Asad, a doctor said that he performed operation on Armenian Aram Babayan who was hospitalized with a stab wound in his abdomen. That person told him that he was stabbed by a person of Armenian nationality called Edik when he got off the “Baku - Sumgayit” coach in the bus terminal. A few days later, he recognized that person on TV and become sure that he was Eduard Grigoryan.

Hamidova Leyla Amrulla, the witness pointed out that her neighbour, Artash Grigoryan changed his behaviour in relation with the Nagorno-Karabakh conflict in late 1987. For several times, she saw him and his Armenian friends talking in Armenian or in Russian. She understood from their words that they were making propaganda regarding Nagorno-Karabakh. Moreover, there were cars with different number plates from Armenia in front of the building block where Artash Grigoryan lived. When she asked the wife of the latter about such kind of number plate changes, she talked nonsense. `«Great Armenia», Nagorno-Karabakh and the majority of Azerbaijani territory belong to Armenians, Azerbaijanis (Turks) are nomadic tribes and they settled in the land of Armenians, and Azerbaijanis are bloody-minded and enemies of Armenians` the wife added.